Independence: It's Not Just A Day -- posted by Sarah Grace

No doubt when you're at the Lexington County Peach Festival, there are some sights to behold. This time, we saw a genteel, pleasant-looking grandmotherly type... until we noticed HE had a full, gray, Tom Selleck mustache.

Of course being there again brought back memories of watching Billy enjoy a slice of genuine Southern Americana (which is identifying more Southern than American these days) when he came with us to the festival back in 2011. He had never seen rusty old pickup trucks with Confederate flags waving off the back, or tasted peach ice cream, or watched families dancing the Shag in front of the bandstand. Prior to the Peach Festival, while playing a game, Billy learned the hard way that we value freedom over respect... a lesson he'll never forget. So this year when the band played Aretha Franklin's "Think" (with the refrain of "freedom") and then "Respect," I had to text him letting him know where we were, and that we were thinking of him. 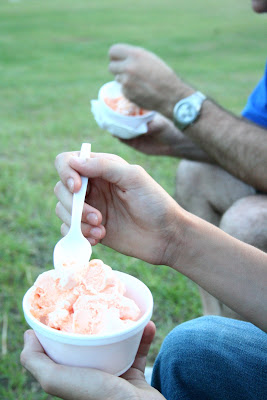 Yes, we love our freedom for our God, Bibles, and family, and when like-minded people congregate in lawn chairs watching their kids play frisbee or throwing the football while waiting for the fireworks show, there's a certain communal peace and contentment. Unlike much of the world, we know who we are. 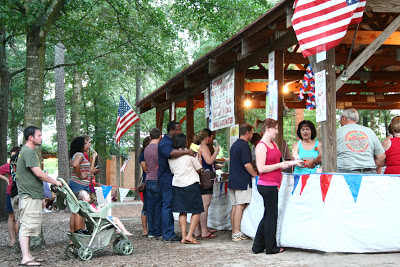 Once the sun went down, we broke out the Dollar Tree glow sticks, and this year, after playing the traditional glow-in-the-dark ring toss, my brothers decorated me the Queen of Tron. They also reenacted a chain gang scene from "O Brother Where Art Thou?" 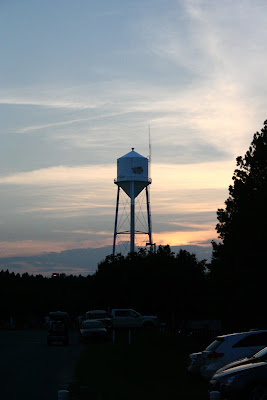