Tintin 3D: A Review -- by John, George, and Richard 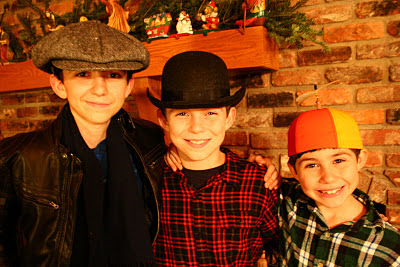 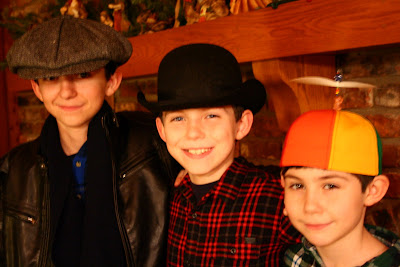 Here we are in the hats we always wanted, just before leaving to see Tintin 3D.

It was... AWESOME! It was a mix between Pirates of the Caribbean, Indiana Jones and Sherlock Holmes, because it was seafaring, action-packed with epic John Williams music, and a mystery with great fight-scene choreography.

The detail of the animation, plus the 3D technology, made it feel as real as if you were in it. It felt like you could reach out and touch the characters.

Thomson and Thompson, the two Scotland Yard detectives, are hilarious. Their clumsiness provided a lot of slapstick comedy. Captain Haddock was funny as well with all his sayings and antics.

The movie was just as good as the book, and maybe even better with the added scenes.
The whole family enjoyed it, even Mom who didn't expect to since she's not into all that sort of thing. She was amazed and loved it.
Posted by The Allen Family at 6:53 PM

So many posts to comment on I don't know whether I am coming or going anymore! Great review boys, I can't wait until I get to see it. You all look so fetching in your hats by the way. Wonderful.