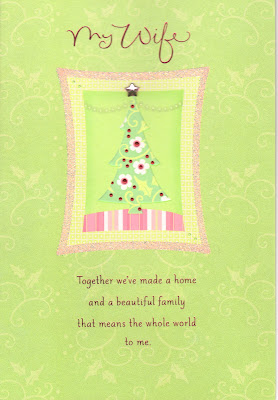 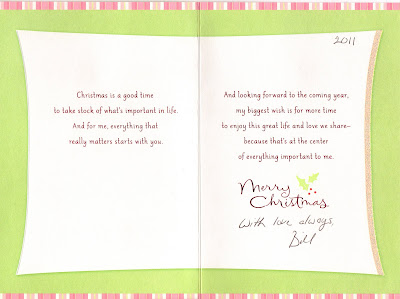 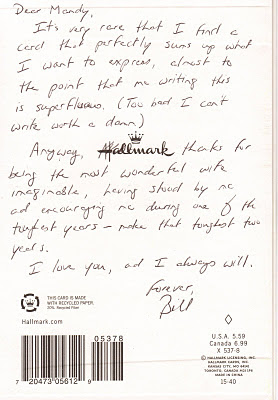 This is a card my dad gave my mom and it is very pretty and sparkly. He also gave her nice ear buds that don't break. He also gave her gravel, called crush and run, to put on the driveway because we have big holes that fill with water and she calls them Lakes Allen and she complains about them all the time. The man will come and grade the lane and lay down the gravel. At first I thought Dad was giving Mom a box of coal, but it was a box of gravel to represent having the lane fixed. She loved it! We gave Momma a pocketbook and the older boys gave her a Kindle because she always reads to us and that is a homey tradition.

I love my Nerf guns. Momma and Sarah, my sister, found them just before Christmas and they had been marked way way down from $35 to $5 so they bought four of them. Two of them were large guns and two boxes contained two pistols each so that makes six guns altogether. I also got a basket for my bike so when we go for a ride I can carry the sandwiches for a picnic. The egg bucket fits in it perfectly so I can bring home the eggs from the chicken coop on my bike.

I also got a spy kit from Dollar Tree. It is a decoder that you can disguise a message and put the decoder over it to read it.

You've seen my propeller hat, like Spanky's beanie, and I've been getting compliments on it like you wouldn't believe.

My big present was a heavy duty one. It is a compound bow that can be outfitted to use for bow fishing. I didn't get a bike like everybody else so I got a big present.

I also love a Bingo game from Dollar Tree. Even the older boys played it with me and I loved it because they work a lot and I miss them playing with me. Then we started trading our candy. I'm a wheeler dealer because I don't eat my candy until trading season is over. Will drives a hard bargain.

We got out the I Spy books because that is a tradition to pull them out at Christmas. They are so homey and even Will loves it when we pull them out. That is like the kick-off to Christmas.

Have a Happy New Year and God bless you all!
Posted by The Allen Family at 6:17 PM

That really is a lovely card, and a lovely message from daddy, too! Mr Lou bought me SUCH a pretty card this year, with a filigree-type frame of tiny flowers over the picture. Im going to try to save that part and maybe use it to frame a photo of us both. Ive loved reading about ALL your Christmases in your last lot of posts - thank you all for sharing them with us.

We loved hearing about the antebellum church and all the Tintin stuff. There is a shop in Bruges (where my sister has a house) which is just ALL Tintin things. A whole shop of Tintin!

We hope you all have a Happy New Year, lots of love s x

My parents said they have been to that Tintin shop in Bruges! They went once with Uncle Tony and Auntie Claire (Tony is a MASSIVE Tintin fan I have since found out).

Cheeky Monkey, when you next play Bingo, the caller can use this list:

Before you read the number, you say the nickname. So you say "clickety click, sixty-six" or "unlucky for some, thirteen". There are also 'responses' the crowd playing say, but I can't find any online. For example, 23 is also sometimes called "St. George's Day, twenty-three" and the crowd call out "good ol' England!" or "5 and 9, the Old Brighton Line" and the crowd respond "it was, it was". Likewise, if you have 2 and 8 (a duck and a fat lady), the crowd respond "quack wobble", because 22's response is "quack quack" and 88's response is "wobble wobble".

That sentence was far too long.

But great post Richard and so pleased you had a great Christmas!

To be fair (to me, your mother), I hardly complain "all the time" about Lakes Allen. I mostly complain when my brain is banging against the walls of my skull while driving/floating through them like some extreme terrain daredevil... in a 15 passenger van.

Y'all are a strange rhyme-y people.