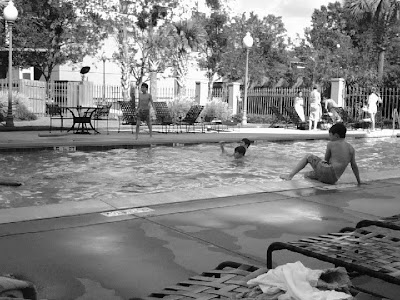 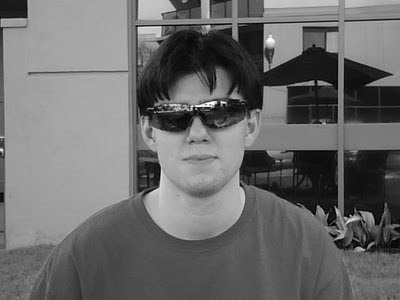 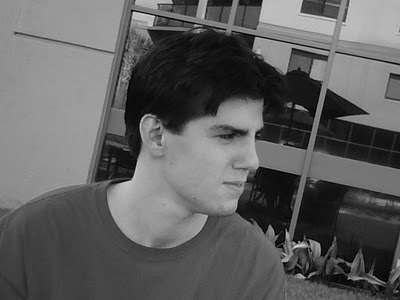 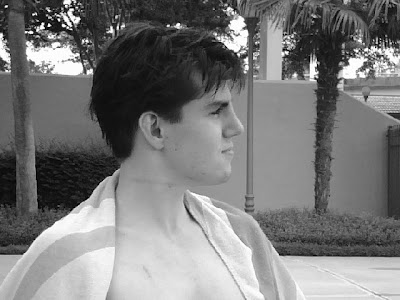 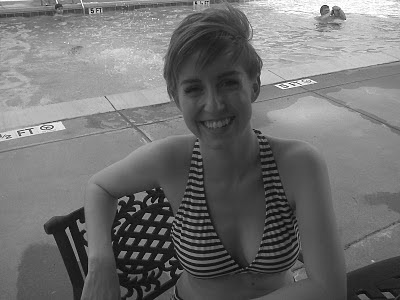 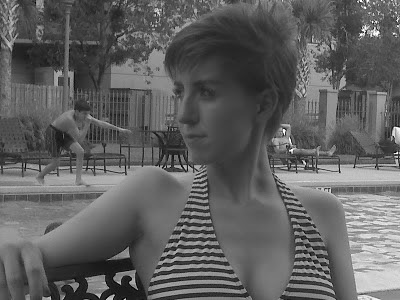 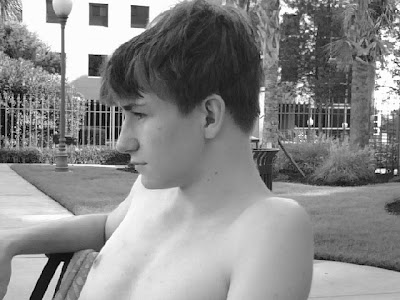 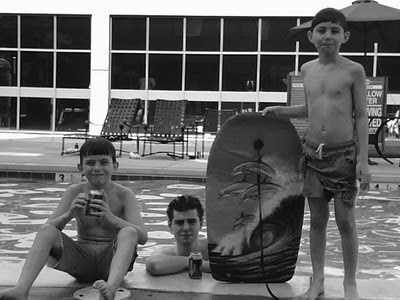 Yesterday I took the kids to the pool (Bill usually does that after work but he was going out of town), and I had several wonderful things happen to me.

First of all, every time we go to the pool the little boys want to take their schoolwork with them. They actually don't want to break away from their lessons to go! Usually John has a book he doesn't want to put down; Richard is into creative writing and he carries his pencil and story pages, which are rippled and smell of chlorine; George is into his math, and he's whipping through his book at a breakneck speed. That speaks well to the success of our homeschool, don't you think? My goal has always been to instill a love of learning in them, not just pour information in for the sake of obtaining knowledge. At least for me, information never stuck that way.

Another benefit of homeschooling is that typically children who aren't age-segregated throughout their entire schooling are much more likely to socialize comfortably with a greater variety of ages. We've noticed in mixed family social situations that the traditionally schooled kids tend to congregate together by age, and then pull away from the main group. Homeschoolers tend to prefer staying in the family groups. Yesterday I watched Will thoroughly enjoy playing catch with a toddler at the pool. In fact, he preferred to ooh and aah with him even when a rough and tumble game of Capture the Flag was on. I just loved watching it. And I'm always blessed by how well they get along with, and thoroughly enjoy, the elderly.

But the best thing to happen to me at the pool was when Bill came from his office, pulled a chair right up to mine, came forehead to forehead with me while he took my hands in his and held them to his chest. You see, he was leaving for a night in Tennessee on business, and he was already homesick. He stayed with me much too long, putting him in Chattanooga at nearly midnight, but he just couldn't pull away. We smooched a little and he lamented having to leave. As he left, I walked him to the gate and gave him a goodbye smooch-a-roo. Shortly thereafter, one of the twenty-something fellas at the pool made it a point to come over to our table all excited about how he saw us kissing and that we looked sooo in love and how awesome it was to see! Don't get me wrong, we weren't making out or anything, just sorry we had to be apart. I wonder if that young man was amazed that such old folks could still have it goin' on.

I also wonder what that fella would say if he knew Bill texted me a couple of hours later, and then emailed me when he arrived at his hotel. I got a wake-up call this morning with him telling me he made himself dream about me last night. How does he do that? I don't know-- I'm just glad he does!
Posted by The Allen Family at 6:47 AM