Merry Christmas, Every One! -- posted by John

We have a tradition of going to the same place every year to get our Christmas tree. It is a fruit and vegetable market in the spring and summertime, pumpkins in the fall, and a tree lot around Christmastime.

Our favorite part of the tradition is that once we pick our tree, we boys get up on the roof of our 15 passenger van, straighten the tarp, and tie down the tree. The feeling on the roof is like you are tall and doing a mature thing. We all looked forward to the day when we were allowed to go up there and this was Richard's first year.

As soon as Thanksgiving rolled around and we began thinking about Christmas, Richard started asking Mom and Dad if he could get on the roof this year. They didn't answer right away because he is only six years old. Richard even reminded Mom that if he didn't get to, then what if Jesus came back suddenly before next Christmas and he missed it forever. She didn't point out that if that happened he would get to fly to meet him in the clouds, she knew that wouldn't help anyway.

A week or so later Mom called us all together to make a suggestion since we are being very careful with money these days. She asked us how we would feel about cutting down a cedar tree on our property this year, instead of buying the traditional Fraser Fir. She said it could go down in our history as the year we had our most warm, wonderful, and loving Christmas with few presents and a crummy old cedar tree. She said it would be fun. When she said this Richard jumped up and darted for his room. She had forgotten about his dream of getting on the roof! She followed him and comforted him and offered to let him just get up on the van anyway. He agreed, but you could tell it wouldn't be the same.

Most of us were okay with Mom's idea since these things usually work out. Spencer suggested we use an artificial tree we have in the attic. He didn't think a cedar tree would "honor Bethhallel Academy" (our homeschool) and would "represent failure and a lack of willingness to work together as a team." He was half joking. He was joking about the reason, but he wasn't joking that he didn't really want a cedar tree. We also wanted to go to the tree lot and give the men the Christmas tip money we give them every year. That is a tradition we really didn't want to part with since they are such a big part of our happy times choosing a tree and tying it down.

Meanwhile, we had waited very late to get a Christmas tree and when Dad went by the lot one of the men that helps us every year thought maybe we had moved and said they were wondering where we were. They were down to just 24 trees left and said we should hurry if we want one. Dad called on his Blackberry for us to get our shoes on because he was coming to get us.

When we got there the guy had tagged a tree to save one for us. Mom explained that we were thinking of going smaller this year to save money. He said that was fine and he wondered what happened to us and said they all missed us. He said they love it when we come by because they enjoy the way our family loves each other.

After we had looked at the tree he tagged, he told us to come around back behind the building because he wanted to show us something. When we got there he held up the most perfect Christmas tree we've ever seen. We've never had such a beautiful tree. He said a man who had first pick had them hold it for him, but he never came for it. He wanted us to buy it. They all wanted us to buy it! Mom said she loved it, but we were trying to do less this year. He said they were knocking $20 off. He then convinced her that the man wasn't coming back because it had been a month, and besides, he hadn't paid for it and they had to sell it to somebody. She and Dad looked at each other and Dad was wanting it. We all agreed.

All that was left was to slice off the bottom of the tree and tie it down. Richard was the happiest kid in the world standing up on the roof! He put his fists on his hips like Superman and took in the view with pride. Oh, and when Dad went to pay for the tree they took off another $6 and gave us a gigantic fresh wreath with a big golden bow! We also left Christmas money for a firefighter that usually helps us but we missed him this year. We were all just blessing each other. We pulled away with great emotion filling us up.

(left to right: Richard, George, me. James still gets up there but he wasn't in the picture. Will and Spencer have outgrown it.) 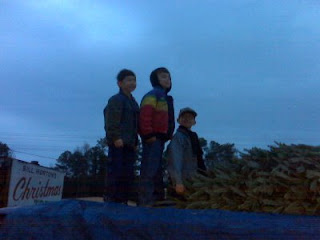 I saw A Christmas Carol but not the very beginning. It was the one with Patrick Stewart. The Ghost of Christmas Past looked very unmanly and pale. I could easily beat him up.

Charles Dickens wrote A Christmas Carol and I could have guessed with the style clothes and the gloomy, cold, wintry, dark, and dirty England. And don't forget the goodly hearted poor boy that makes you want to be his friend and relieve his poverty.

When Mom and Sarah Grace went shopping last week they got very hungry and even though we decided not to eat out, they pulled in McDonald's drive through because they accidentally skipped breakfast and they needed to eat something. When they pulled up to the window the girl said there was no charge because the man in front of them paid for their meal. Mom asked why and she said it was just a random act of kindness. I'm glad we live in the South.

During Bible time this morning I pulled back an imaginary arrow in an imaginary bow to shoot James because he was making fun of me. Usually he falls over like he's hit. Today when I pulled back the arrow I accidentally bopped myself in my own eye. Hard. Every time Mom remembers it she starts laughing. She was sitting next to me.

UPDATE: Today after I wrote this post we got a Christmas card in the mailbox and it said this: People like you make the season a little nicer... Thanks for being so special! Dear Allen Family- We thank you for making your "family tradition" so wonderful for us! Have a Merry Christmas & a Healthy and Happy New Year! They signed their names and sent us back the check for the most beautiful tree in Columbia! It had Merry Christmas written in red with VOID written across it. The firefighter sent back our cash gift, too!