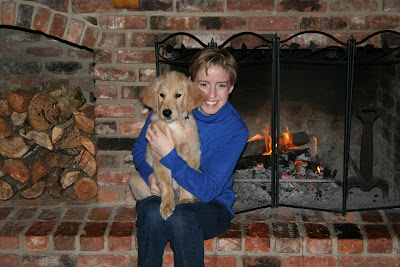 C.K., our Golden Retriever puppy, is in love with me. No seriously - he lurves me.

In the morning when I feed the dogs, C.K. happily chows down. But, if I leave for any reason, he lies down next to his bowl and stops eating. When I return and stand by the gate, he simply lifts his head and watches me with ears erect. It's only when I enter the room and stand beside him that he jumps up, wags his tail, and continues eating. 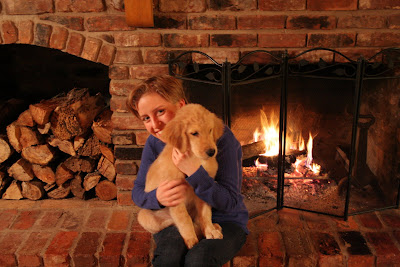 Posted by The Allen Family at 6:49 PM No comments:

I Got Lost in the Woods -- posted by John

Yesterday Will and Spencer decided to go for a walk in the woods. After more than an hour, Mom asked me if I knew where they were. I thought they were at Augustusland. James and Spence were the first to go there in the summer and it was blooming. It was like a beautiful jungle with streams and vines and greenery. James said, "Let's name this place after you." So, he named it Augustusland since Spencer's first name is August.

I told Mom they went to Augustusland because that's where I thought they went. I told Sarah I would go get them because it wasn't far. Once I got there, it was completely demolished because it is winter and it was ugly with bare vines and downed trees .... a waste land. I got confused because nothing looked the same. It scared me to see it because I couldn't tell how to get home.

I was brave while I was searching for something familiar but there were passageways where the sun would come in and I would go to it thinking it was the way home and then it would stop and be the dark woods again. This went on for a half an hour.

Meanwhile, Mom knew something was wrong and she ran through the woods calling our names. She nearly ran all the way to the Interstate hollering for us. She went through thorns and streams and hills with a t-shirt and nothing to protect her arms. Finally she turned back to get the van and her cell phone.

As she was getting close to the house, I finally saw a house I recognized and I saw our lane beyond it. I ran like Forrest Gump when I saw my mother in our driveway. From a distance, she thought I was Will because I had changed into a white shirt. (I sure wasn't going into the forest with my new orange Gator shirt on!) I started yelling, "MOM! MOM!" and I was running as fast as I could. She turned to Sarah who was looking for us beyond the goat pen and yelled that she had found me.

I could take pictures of my scratched up legs to show you what I went through. I had on shorts and my legs are covered in scratches from the thorns and thickets I got stuck in. Mom's arms are healed now.

Spencer and Will had followed a creek to a stream to an area with deer blinds and they got turned around but they weren't as lost as I was.

While I was lost I saw some snake holes that got me thinking but for the most part, I was brave. Spencer and Will had each other. Plus they are 19 years old and fifteen years old. I'm only nine so I think I did a good job keeping my head together. I felt like Bear Grylls.

Last week we went to the art museum in Atlanta called The High Museum of Art Atlanta. It is nicknamed "The High." It is three and one half hours away. Mom packed sandwiches and drinks and chips and brownies.

They had an exhibit of the impressionists. It showed how the impressionists learned from the masters. You wouldn't believe all the famous paintings we saw! Also, we each had headsets so we could learn about them. We saw rooms and rooms of paintings for hours and then we had enough time to go to Louvre Atlanta and see the ancient art exhibit. Louvre Atlanta borrows art from musée du Louvre in Paris, France.

We have two new art courses. One is: "Art across the Ages" Taught by: Ori Z. Soltes Georgetown University and the other is: "Museum Masterpieces: The Louvre" Taught by: Professor Richard Brettell The University of Texas at Dallas. We get lots of courses from The Teaching Company.

Professor Richard Brettell looks to me like Raleigh Sinclair who is played by Bill Murray in Royal Tenenbaums.

After we went to the museum it was getting dark and Dad drove us around Atlanta and taught us things like history and different sights. We saw Margaret Mitchell's house. She wrote Gone with the Wind but I need to see it again because it's on the tip of my tongue but I forgot it.
Posted by The Allen Family at 7:02 PM 1 comment:

Christmas has past. We are taking our Christmas tree down now. Where do I begin?

Here are some pictures of my grandmother's house at Christmastime -

Before Christmas, Ma took us to Biltmore House to see all the Christmas trees and decorations. There were over 50 trees. The biggest tree was empty-looking between the limbs but it was beautiful with the ornaments. The other trees were formal and pretty but kind of ordinary. Frankly, our Christmas tree is much better. Ours has much more color with royal purple and blue and rich reds and gold and the colors were like jewels and they were metallic and shiny.

We ate in the restaurant at Biltmore that used to be the stables. We were in the hay loft. I had to order from the kids' menu and it had the usual: chicken strips (4 of them) and macaroni and cheese. The other choices on kids' menus are a burger or hot dog or a grilled cheese sandwich. At seafood restaurants the kids' shrimp plate has only four fried shrimp! Can you believe that? Lucky for me, Mom and Sarah Grace give me some of theirs. Sarah shared her country barbecue and Mom shared her pot roast that had fried onions on top. It was delicious.

We had a lot of fun seeing an American castle and shopping in the shops. Everybody should see Biltmore. It's an American institution!

We went to Ma's house for Christmas Eve but Dad stayed home with Webb because Webb was getting a cold and slept through supper. We brought Dad a plate home.

The next morning for Christmas breakfast Ma came over to eat and see us open our presents.

Will got Photoshop and a case for his tripod. Sarah Grace got a diamond ring in an antique-like setting. The gold looks carved out. It is called filligree. Spencer got NIKE stock and a Gator jacket. James got an art curriculum. Webb got his Hess truck, as usual, and he also got a remote control plane that flies like an eagle. I got a kids' laptop that has a color screen and a Gator t-shirt. Georgie got a three man slingshot and it is powerful! Richard got a Geotrax train set. We also got an ESPN electronic football table and a yellow Kett car. And we young guns got real WWII helmets and canteens and a back pack and Richard got a kepi and we also got dummy grenades. It's been too cold to play in the woods but we can't wait.

God hates war but sometimes a man's gotta do what a man's gotta do. It is fun to pretend you're a man doing man things and then one day if I'm called to go to war, maybe I won't be so scared if I've already imagined myself on a battlefield. I don't mind telling you that I don't want to go to war but I will if I have to. I knew after I learned about Hitler that sometimes you have to go to war to stop something worse. I'll never forget a documentary that I saw about Hitler. It was horrifying. We'll never have peace until Jesus sets up his kingdom. And that's why we're in a hurry for him to come back to get us and then later set up his kingdom for one thousand years on Earth. And then the rest is heaven.

We're going to the High Museum of Art Atlanta and Louvre Atlanta. The last time I was in an art museum was The National Gallery of Art in Washington DC. My mother almost had a heart attack when I reached up and touched George Seurat's Seascape at Port-en-Bessin, Normandy, 1888 -

It was so beautiful that I had to touch it. Don't get me wrong, I'll never do it again, but the colors were so beautiful in little dots up close. It was like how you can look at certain wallpaper with your eyes crossed and it goes in and back out when you uncross your eyes. My hands were clean and I barely felt it. I wasn't thinking about it; it just kind of drew me to it. You wouldn't believe all the colors in it up close. I hope they don't ever put up ropes so everybody can see what I saw. Maybe they should have a guard that reminds children not touch it but you can still be able to see it up close.


Posted by The Allen Family at 5:58 PM No comments: