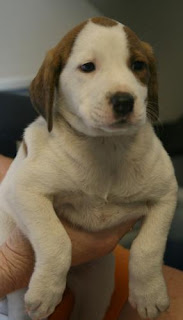 We're in the process of adopting a puppy. She is part beagle and part feist, we think. Feist is a southern dog that hunts squirrels. This puppy was abandoned and they found her in a ditch with just about everything wrong with her. The rescue people put her on her back and she didn't move. That is one of the tests to check for aggression. She passed.

Sarah Grace, James, and Dad got to see her when they went to Charleston. I saw a picture of her. They fell in love with her.

I love all of the music in The Royal Tenenbaums, especially when Margot is walking away from the bus. In fact, I loved the whole movie except for a bad part about Richie where I had to turn my head but they told me what happened. I wouldn't want to see that part anyway. They put stuff like that in movies just to spice it up. I wish they wouldn't show it because we always have to turn our heads.

I loved it when Royal took Ari and Uzi out to loosen up since their father was so angry and afraid.

Mrs. Tenenbaum very much reminds me of my mother. They are strong and smart and they give good advice. They kind of look alike with the same style glasses. They are serious and wise to do the right thing, only my mother is the wisest because she would never kiss another man besides my father and she would never let us take a television in a bathroom.

A couple of nights ago someone came in our yard and my brothers and mother went outside to investigate. Will took a rake, Spencer took his big walking stick, and Mom took a .22 but they didn't find anybody. The next morning someone had let Uncle Bob and the sheep out of the gate. That's one of the reasons we are getting dogs. Ever since, Richard has been afraid to go to the bathroom because he keeps thinking it was the child catcher in Chitty Chitty Bang Bang. That character is creepy looking but I'm sure I could take him down because even though he has a sharp evil nose, he's sissy looking. The actor who played him was a ballerina who wasn't very strong looking like Mikhail Baryshnikov, if you know what I mean.
Posted by The Allen Family at 7:02 PM