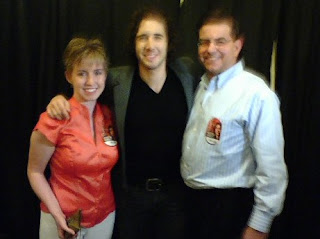 For my 18th birthday in May, my family gave me tickets to see Josh Groban in concert at the Bobcat Arena in Charlotte, NC. And last night it happened.

First, Daddy and I went to Monticello Restaurant for supper. I ordered the Georgia peach roasted duck. It is hickory roasted duck served over spiced potatoes and carrots with a peach and brown sugar barbecue sauce. Yum! Daddy ordered the bourbon glazed pork tenderloin served with cheddar bacon grits, sautéed spinach, and fried sweet potatoes. It was so tender he retired his knife after the first bite. For dessert, I had the creme brulee like last time. Although I switched the entree from my favorite, shrimp and grits, I couldn't bring myself to try a different dessert... yet. I was eye-ballin' that chocolate-hazelnut torte, though. Maybe next time.

After supper we walked down to the Bobcat Arena, which is a beautiful and well-run facility. There was a long line outside of fans waiting to be seated, but as I followed my father I noticed we walked right past the line and went straight to the Will Call desk. He told the lady at the desk that he was expecting an envelope, and I thought it had something to do with verifying our tickets for the concert. As soon as he was done at the desk, I asked what was going on. His reply, "Let's go meet Josh Groban."

Once I regained consciousness, and used every molecule in my body to keep from crying and ruining my make-up, I asked him how he was able to obtain tickets for the Meet and Greet. He answered, in his absolute best Vito Corleone impersonation, "I made him an offer he couldn't refuse."

Fortunately, as we were in line to meet him, an excited lady behind us offered us breath mint strips which we gladly accepted. I think she was an angel sent by God.

Before I knew it, we were next in line to meet Josh. We introduced ourselves and, believe it or not, he introduced himself, as if we didn't know who he was! Since I knew he had been sick, I told him I was glad he was feeling better. I don't remember what Dad said as I was caught up in the moment, not to mention they were filming it, which added to the whirlwind atmosphere.

Typically, I'm not one to get star-struck, but God has so gifted this humble man, that I felt honored to make his acquaintance, look him in the eyes, and enjoy his fine manners. His personality onstage is affable and courteous. And he has a fantastic sense of humor.

The show was spectacular! The stage alone was a sight to behold. The band was is an oval area behind the stage. On an elevated platform behind the band was an orchestra section, where members of the Charlotte Symphony Orchestra provided additional accompaniment. Behind the orchestra was an elliptical screen made up of individual vertical screens that displayed images to go with the songs. Behind the stage was a large wall of video screens as well. And to cap it all off, suspended over the stage were six light panels that were independently operated to be raised and lowered to enhance the effect, as may be seen in the pictures below.

It was an extraordinary evening and I am so grateful to my father for blessing me with my bestest birthday surprise! Thanks to a friendship he has with a business associate, who has connections, he was able to get us into the Meet and Greet.

Thanks everybody, it was a fabulous birthday! 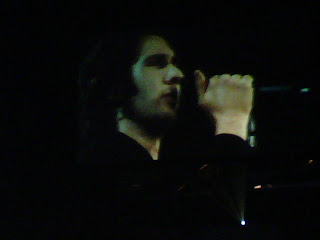 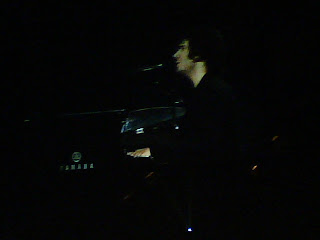 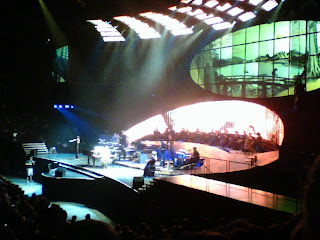 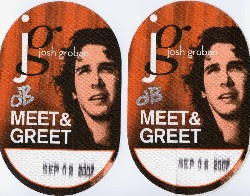 Aww Sarah, I had a similar experience myself and it sounds like you composed yourself much better than I did.-haha Thank you so much for sharing your encounter with Josh Groban. It was a pleasure to read.