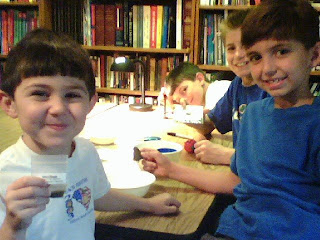 We've decided to share some of our homeschool activities on our website. Now, I know that won't be as exciting as Sarah Grace meeting Josh Groban, but I hope you will enjoy it. Today we did experiments with magnets.

George, who is in the back of the picture, has a pencil and two ring magnets. The experiment he did was to hold the pencil upright, drop a ring magnet through it, then drop another ring magnet on top but with same poles facing each other. The result is a floating magnet.

I'm next to George and I'm holding a smiley face we drew on a card. I know that doesn't sound scientific but hear me out. We slid the face in a Ziploc bag, cut off the excess, poured iron filings in the front, and then sealed the bag. Next, I used a bar magnet to pick up the filings to make a beard, moustache, sideburns, and hair on the smiley face. It works like a Magna Doodle.

Next to me is John who is holding the lodestone which is magnetic. We went around the house testing for true metals with the magnets. Iron, steel, and nickel stick to magnets but aluminum and non-metals do not.

In the foreground is Richard. He's holding a little bag of iron filings. He kept bringing us bowls of water to make more compasses.

On the table is a compass I built with a bar magnet, a bowl of water, and a plastic cup. We also magnetized pins for compasses and floating toys made with bottle caps and modeling clay.

In Magnesia, there is found a rock called magnetite. That is where we get the word magnet. It is similar to lodestone.

Dad is going to experiment and teach us about electromagnetics this weekend. Here is an interesting site called Magnet Man.
Posted by The Allen Family at 6:47 PM